Behind BC’s Unemployment Rate During COVID-19 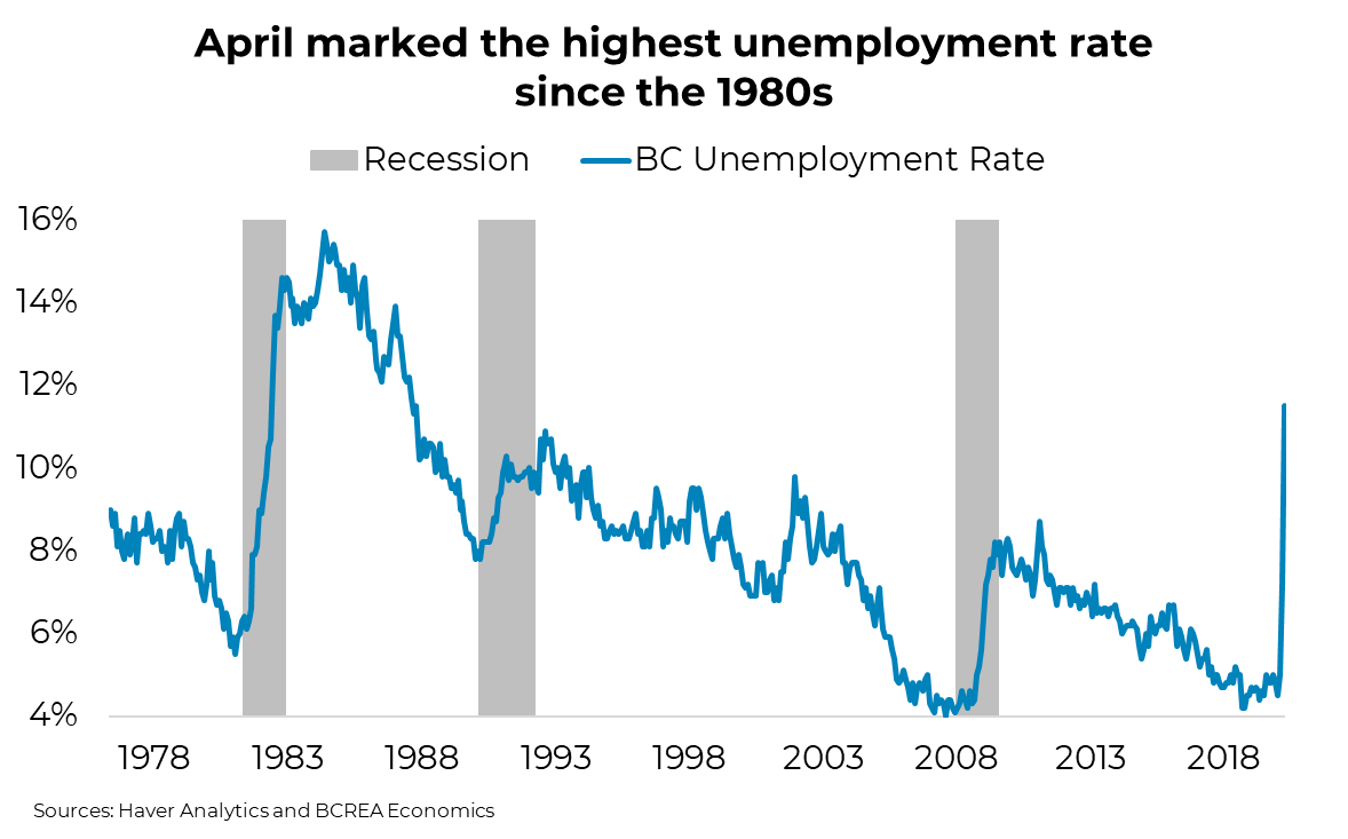 Since the pandemic was declared in March 2020, an unprecedented number of jobs have been lost in a very short period. Within two months, employment in BC fell by almost 383,000 jobs, essentially wiping out all job gains since the 2008/09 Financial Crisis. This brought the April unemployment rate up to 11.5 per cent, BC's highest unemployment rate since the recession in the early 1980s. In this report, we take a deeper look behind the unemployment rate to understand who has been most impacted, as well as potential implications for the real estate sector. 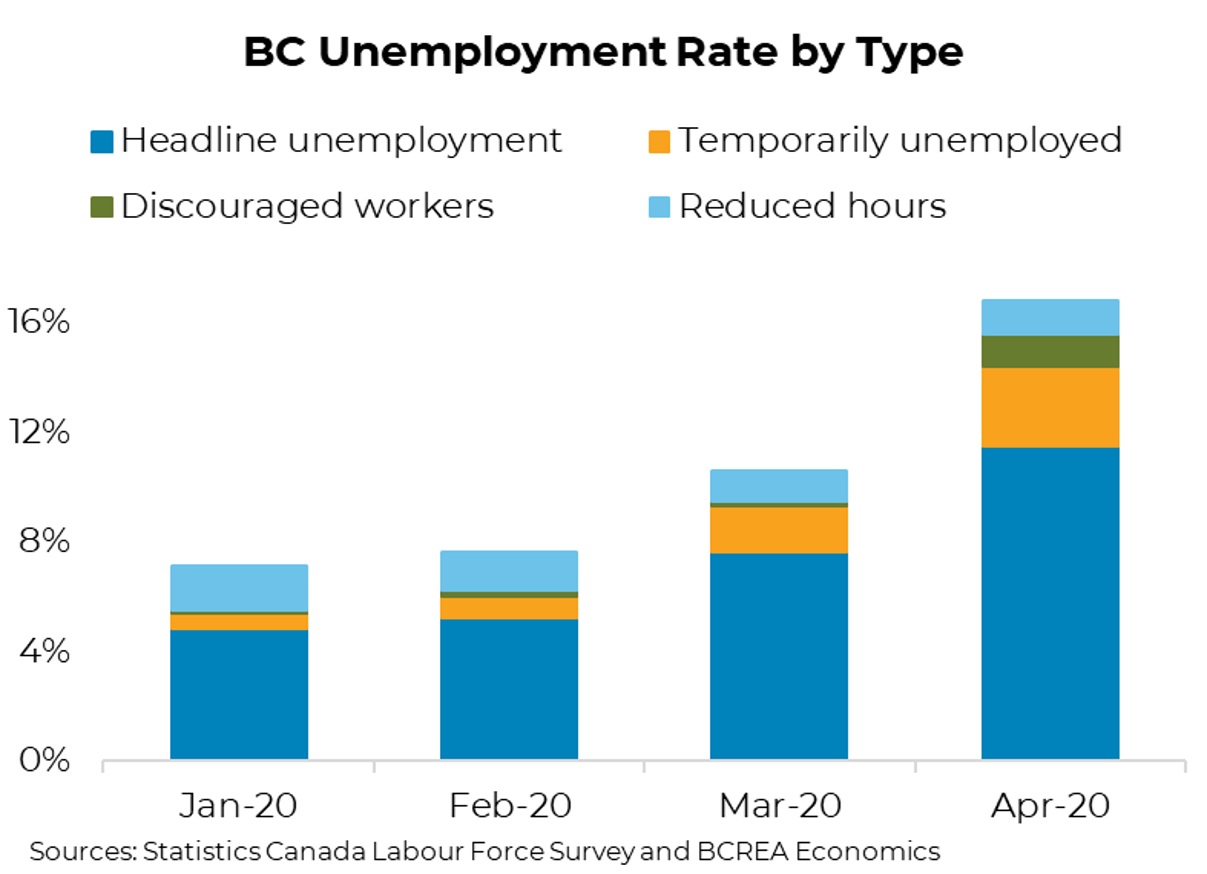 The April unemployment rate does not capture underutilized workers who are temporarily unemployed and will likely return to work once restrictions have eased; those who are able to work but have been discouraged from looking for a job; and those who have had their hours reduced due to the pandemic. If we include these individuals, the April unemployment rate would have been 5.3 percentage points higher at 16.8 per cent. 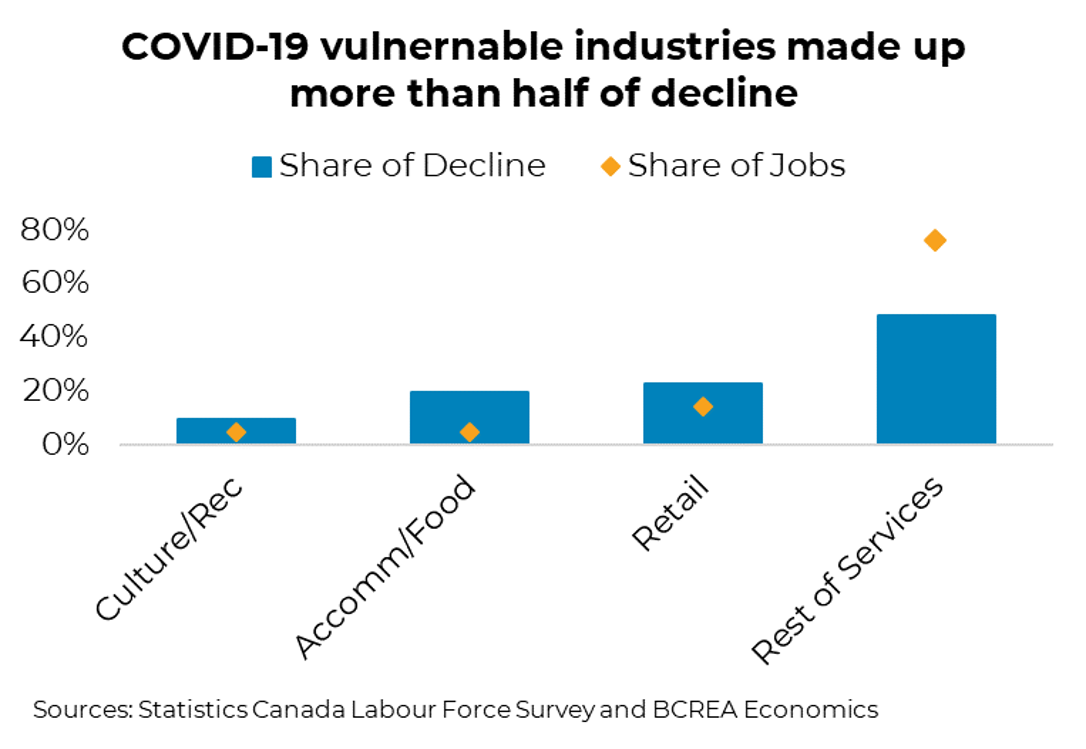 Unlike in past recessions, where goods-producing sectors such as manufacturing and construction would have been the most impacted, the services-producing sector has been hit hardest, representing 90 per cent of job losses in the province since February.

Within the services sector, more than 50 per cent of losses were in the sub-sectors of culture/recreation, accommodations/food services and retail. The decline in these sub-sectors was disproportionately higher than their 24 per cent share of total service sector employment. These sub-sectors tend to have lower wages, less job security (temporary and non-unionized) and fewer health benefits. 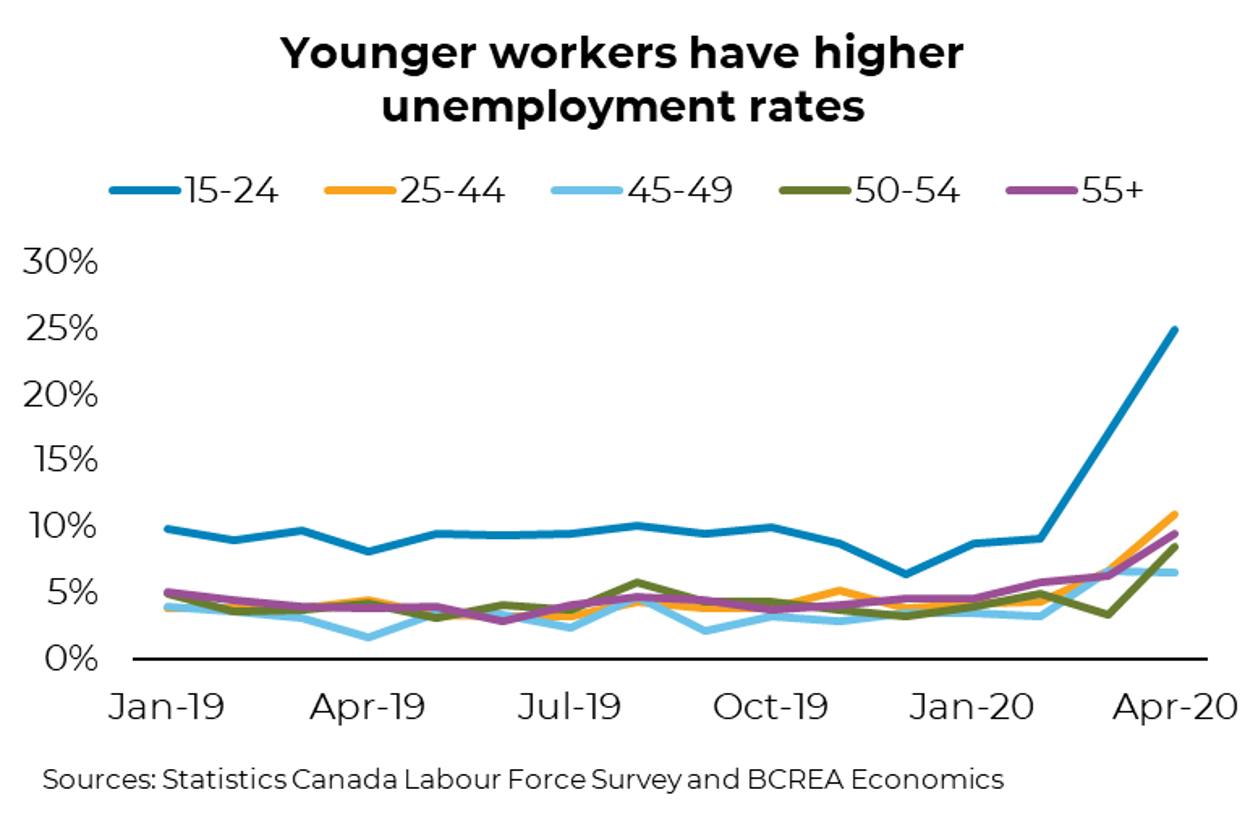 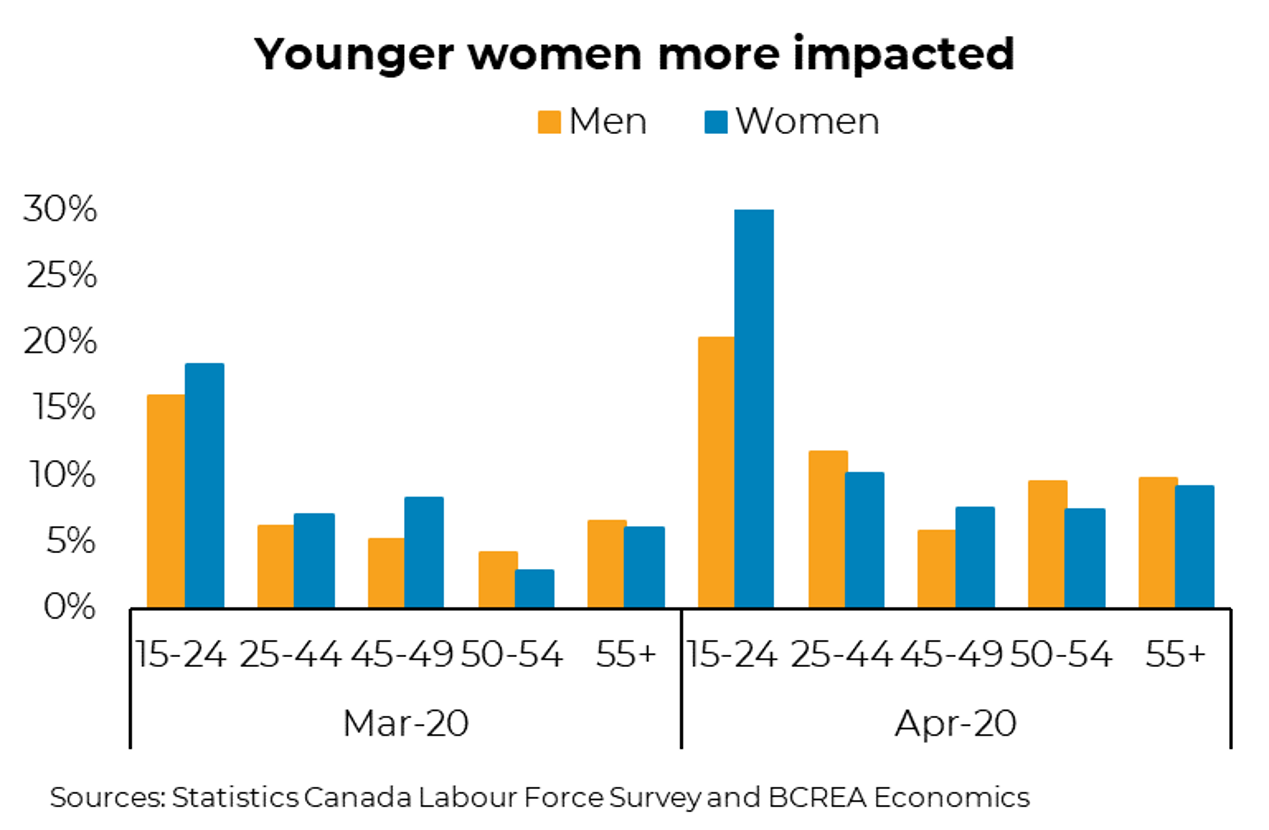 Focusing on the services sector, younger workers (15 to 24) had the highest unemployment rates in April, which is not surprising as a higher share of them are employed in COVID-19 vulnerable industries. Among younger workers, women were more negatively impacted, with an unemployment rate of 30 per cent in April compared to men at 18 per cent. Meanwhile, older age groups such as those in the first-time homebuyers range (25 to 44) and homeowners range (44 and over) experienced less of an increase in unemployment rates.

The Canada Emergency Response Benefit will continue to help individuals to cover a share of household “core” spending (food and shelter) until they return to work, the effectiveness of which will undoubtedly vary between regions based on local costs. The Canada Emergency Wage Subsidy (the uptake of which has been slow) will help some businesses retain a portion of their employees, but only if they are able to re-open. Additionally, some banks and other financial institutions are offering relief by way of deferred mortgages (740,000 Canadian households have delayed such payments, representing 15 per cent of mortgages) and credit card payments. The hope is that these support programs will tide households over until they can begin returning to work.

The Province has begun to gradually ease restrictions for some businesses and services to re-open, including provincial parks, elective surgeries, retail, and food service establishments. These sectors made up the bulk of the decline in employment since February. At the same time, employment recovery will depend on consumer demand. That demand has thus far proven to be cautious in countries like China and others who have started to re-open. The easing of restrictions related to culture/recreation and tourism is not expected anytime soon, suggesting that unemployment in these sub-sectors will persist.

Implications for the real estate sector

So far, the majority of job losses have been in lower wage sectors and among younger workers who tend to be renters, which suggests we can expect further uncertainties and negative pressure on rental markets. Additionally, there is a risk that underutilized workers who are temporarily unemployed due to the pandemic could become permanently unemployed if businesses are not able to recover from the economic downturn of the last few months. A recent Canadian Federation of Independent Business survey reported that 32 per cent of firms were unsure if they could re-open. This could delay potential home purchases or lead to forfeitures in the longer term.

Meanwhile, those in age groups who tend to be first-time homebuyers or existing homeowners experienced less of an increase in unemployment rates. These groups tend to hold jobs in higher wage sectors with more job security (e.g., those temporarily unemployed but expected to return to work, such as workers in the construction industry). As mortgage rates are likely to stay at their current low levels for the next while, first-time homebuyers could be incented to purchase sooner than planned, and existing homeowners could have more cash in their pockets when they go to renew their mortgages.

Lastly, for households who are still employed and self-isolating, they are not spending as much on gas, public transportation, eating at restaurants, gym memberships, etc. Such unexpected savings could translate into healthy down payments and, combined with lower mortgage rates, could expedite some home purchase timelines.

To subscribe to receive BCREA publications, or to update your email address or current subscriptions, click here.